Over the past two months or so, I have dated quite a lot of guys. Mostly only once. Sometimes we got to a second date. But mostly it ended as quickly as it begun.

I have had no success with Tinder. Damo the douche and the one with the Little Sausage both came from Tinder. The other guys I’ve met from there turned out to be assholes too.

I’ve pretty much maxed out RSVP. When I log in, most of the guys on there I’ve already had contact with, or they are particularly hideous and will be on the shelf for a long time.

I invested in dating through the Executive Matchmaker and A Table for Six under the misguided impression that paying more would lead to meeting a higher quality candidate, a man with his shit together, who is serious about a relationship. But no, it’s been a complete waste of money.

I thought when I went back to uni to do my MBA that I might meet a smart and ambitious man who would be well suited to me. I’ve met lots of them actually, but they all have wives already.

I’ve asked all my friends if they have any friends they can set me up with, but no one knows anyone new to introduce me to.

I’m definitely not the type to date where I work, but having said that there is no one that I would be interested in there anyway.

So what’s a girl to do?? A few of my friends have suggested I take a step back from my focused dating efforts and hope that the old adage that you find someone when you’re not looking rings true. I’m not sure I can trick fate like that, and prior to about 18 months ago, I actually wasn’t doing too much to find a man and the only thing that happened was that I ate a lot of pizza whilst drinking wine alone on my couch at home.

If I don’t do anything I feel Im destined to have 18 cats by the end of the year. But I’m really bored with this relentless routine of dating dickheads, so I’m thinking I should give it up for a while. 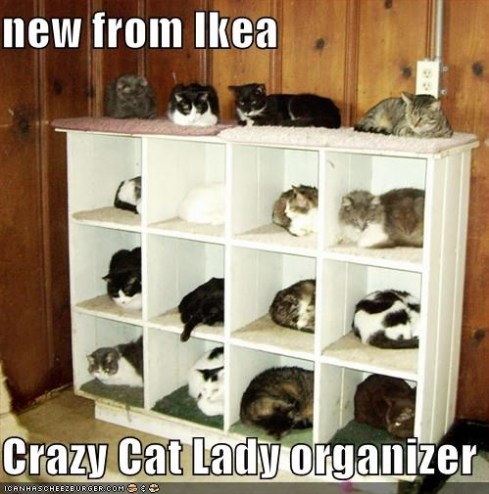